Honours and Awards at the IFLA WLIC 2017 Closing Session

After years of planning, it is hard to believe that the 83rd World Library and Information Congress (WLIC) is almost over […]

IFLA will undertake a comprehensive membership survey which will be distributed to associations, institutions and individuals. The Membership Survey will […]

The General Assembly reconvenes its general meeting of IFLA members at the Closing Session on Thursday, 24 August from 16:15–18:00 (CEST). The […]

First ever live stream brings IFLA WLIC to your door! 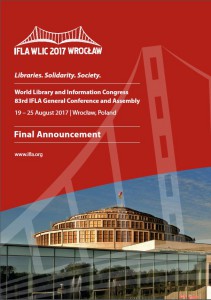 On behalf of the National Committee we are pleased to invite you to the 83rd World Library and Information Congress in Wrocław, Poland, which will take place from 19-25 August 2017.

“Libraries. Solidarity. Society.“ A straightforward yet powerful message that resonates with a singular truth in a country where the most powerful union movement of the past century was born and went on to change the face of history…..